The opening of the Indupark Center in Dortmund has provided the city with a new address for an attractive and varied shopping experience. After two years of reconstruction work and an investment of 32 million euros the retail park in Dortmund-Oespel today celebrates its opening. The 31,000 m² retail property was revitalised and extended by METRO PROPERTIES without disrupting the center's operation. The adaptation of the selling space of Real provided new room for the settlement of a Media Markt, several other shops catering for aperiodic requirements, restaurants 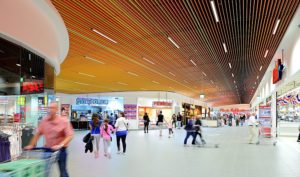 Dortmund's first Media Markt in the Indupark Center
The new Indupark Center provides customers with a wide range of shops. Both Real and the drug store dm-Drogeriemarkt cater for customers' daily needs, whilst Media Markt provides everything relating to entertainment technology. Shops such as Jeans Fritz, Gina Laura, Ernsting’s Family, Takko, 1982 and Deichmann provide modern clothing and footwear lines. This range of goods is further supplemented by telecommunication service providers, a dry cleaner, a hairdresser, a travel agent and a locksmith. An Asian snack bar, an oriental restaurant and a McDonald's outlet are just a few of the food outlets that provide for our customers' culinary needs

Convenient location at Dortmund's Westkreuz
The Indupark business park is the second biggest retail center in Dortmund after the city centre itself and is due to its proximity to the motorway network (Westkreuz) a very desirable trade and retail location. The 1,400 free parking spaces provide visitors with sufficient space to park their car just outside the shopping center. This service is completed by a petrol station and a car wash on the premises of the Indupark Center.

A well-established trade and retail location
The building that now accommodates the new shopping center was built in 1976. The American chain store Wal Mart occupied the large building complex for many years before it was taken over in 2006 by Real hypermarket.

A modification of the floor plan created 19,000 m² of pure selling space with additional shopping zones, quiet areas and discount areas over an area of 5,000 m². The Real hypermarket was elaborately modernised and is now one of the most modern outlets in Germany. Inside the center an open grid ceiling and new lighting ensure a pleasant atmosphere. Additionally, the new retail park's entrance area floor plan was extended, which included a modification of the facade, entrances and roofing. These structural changes enabled a complete technical reorganisation of the property and thereby increased its valuation. Furthermore, the center's transport connections were updated.